Click on the image to see the link between HSV and beer.
Posted by Dagpotter at 3:24 PM No comments:

This is a clip from "Act of Valor" a film made by the British government in 1946 about the fighting in Arnhem, Holland in September, 1944. The film was made with documentary footage from the battle mixed with scenes shot in Arnhem area in 1946. It shows that at that time the U.K. owned a few Panzerkampfwagon V "Panther" medium tanks they must have confiscated after the war ended. They would be worth quite a bit today.

Later in the movie there are scenes with PzKw VIa Tiger I's which would be even rarer.
Posted by Dagpotter at 3:09 PM No comments:

Anarchist Collective Dog Walkers May Be Friends With The Washington Post

I lived in the DC area for over 13 years and regularly subscribed and read the Washington Post. Occasionally there would be stories that described belief that they were worth printing in one of the most important newspapers in the country.

One that stuck in my mind was an article about two twin sisters who volunteered to work on Clinton's second inauguration. Believe you me that was worth several inches in the Style pages. I just assumed they were friends with somebody at the Post and they got the story published that way.

Today's edition though takes the cake. It features an article describing the trials and tribulations of a group of Anarchist Collectivists dog walkers.

I know I find it confusing how a bunch of anarchists can make collective decisions since that wouldn't make them anarchists, would it?

It is kind of like the one hit wonder band Chumbawumba, who I believe, also described themselves as a group of anarchists who made decisions collectively. So here is the video in salute to you, Washington D.C.'s anarcho-collectivist dog walkers. And to your friends at The Washington Post.

Posted by Dagpotter at 8:46 PM No comments:

Fooling Around with 360 Panorama

I have been fooling around with the 360 Panorama app for my iPhone. It allows you to take panorama photos. Here are a couple of results I took last night near the ponds in my development.

Between the hair and the chorus you can't get any better then this.

Posted by Dagpotter at 10:18 PM No comments:

Being an Infantryman Sucks (And They Knew It)

On page 49 of The Army Ground Forces: The Procurement and Training of Ground Combat Troops volume of the Official History of the U.S. Army in World War II is a table that shows how soldiers felt about their jobs. It shows that of soldiers assigned to the Infantry only eleven percent preferred being there. Of those assigned to the Air Corps on-the-other-hand seventy-six percent preferred it.

The table also shows that as of the end of 1943 seventy percent of the casualties were taken in the infantry while only five percent in the Air Corps.

Causation is not necessarily correlation in this case, but most people in the Army at that time realized being in the infantry sucked.
Posted by Dagpotter at 9:40 PM No comments:

Over the last twelve months the Department of Defense has been "insourcing" its contractor employees where they believe it is appropriate. This means converting a previously contractor slot to a civil service one. It is not supposed to guarantee that the contractor becomes the civil servant but that often happens. The savings by this are hard to quantify and there has been little justification presented by the government.

Insourcing has the potential to be hard on small companies as they lose employees and revenue. Bigger companies should be able to absorb the losses of the slots but if they lose their best employees to the government it will affect them long term. They also have lost all of the money put into recruiting, training and preparing that employee for more important work.

SecDef Gates announced a further round of budget reforms this week including a plan to cut 30% of the contractor funding over the next three years. In a sign that insourcing may not be saving money it was also announced that these lost positions may not be insourced.

In an article at Govexec.com Robert Burton, a former defense official, was quoted as saying "The 2011 National Defense Authorization bill passed by the House in May, (H.R. 5136), actually would prohibit data on employee health and retirement benefits from being used in cost analyses produced in determining whether to convert contractor jobs to Defense civilian employee positions. Burton says this is "an admission that the government knows the private sector is cheaper than the federal government in most cases.""

Without comparing the total cost of a person which includes salary, benefits and other costs it is impossible to figure out if insourcing is cheaper. I guess Congress doesn't want that found out and insourcing is more about creating civil service jobs then saving money.
Posted by Dagpotter at 5:28 PM No comments:

Why the Internet is Great?

One reason the internet is great is you get to hear things from people intimately involved in things. Like this comment on YouTube for this Graham Parker video:

thanks so very much for posting this - i was the bass player, and i haven't seen this video﻿ since we made it - my dear old mum slams the front door in graham's face, and the band were filmed in his parent's front room!

Who would have known?
Posted by Dagpotter at 6:32 PM No comments:

Updated as I loaded a photo of the wrong memorial.

The Manassas Battlefield National Park contains most of the sites of the First and Second Bull Run battlefields from the Civil War. In the South the battles are caleld First and Second Manassas. Fought almost a year apart the two battles were Confederate victories.

I visited the battlefield last week and took a lot of photos. Looking at the Deep Cut portion it looks like the National Park Service is restoring the site back to what it looked like in 1862. This is a photo from Yahoo maps showing that part and it is heavily tree covered, which it wasn't when the Union and Confederate troops fought there. 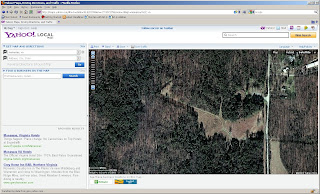 The memorial is in the center with the cleared path leading to it.

This is a photo I took last weekend up to the memorial. You can see that it is now cleared land. This is what it would have looked like to Union troops attacking up the rise towards the railroad bed where the memorial is located. 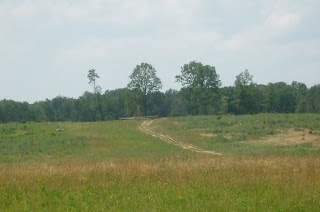 The trees are all gone. I don't know if this is deliberate or they had a fire. I think it is planned as at another part of the cut they are cutting down all of the trees that have grown up in it. In 1862 the cut, despite the railroad construction being abandoned, was clear. The Confederate troops under Stonewall Jackson used it as a natural trench.

Good for the National Park Service as it is always good to see history as it was when it happened.
Posted by Dagpotter at 9:50 PM No comments:

Alabama is blessed with two Apple stores. One in Birmingham and the other in beautiful Huntsville. This gives the state more stores then eleven others (and DC). Assuming Apple places these based on the nerd quotient of the state, Alabama can claim to be nerdier then 20% of these United States.
Posted by Dagpotter at 8:48 PM No comments:

Here is a video of a mini-game within this game. Win it and you get immunity from complaints about your crime until you commit a murder. "Bad Company" by Bad Company seems to be the best song for this.

Posted by Dagpotter at 9:40 PM No comments:

Sammy our last recent male cat died last year. Here is a video I shot of him.

Posted by Dagpotter at 4:46 PM No comments:

CBO Reinforces Reasons For Not Doing Cap and Trade

Cap and Trade is one of the systems proposed to "lower" greenhouse gases for the United States. This is basically a system where the amount of emissions has a hard top and companies buy and sell credits to get around the cap. At his blog, Reducing Greenhouse Gas Emissions: Five Lessons of Economic Analysis, Congressional Budget Director Douglas Elmendorf says that the effect of a cap and trade system would be " lower overall GDP, employment, and households’ purchasing power by a modest amount relative to what would occur otherwise".

Implementing a cap and trade system would not help the U.S. economy grow in the short term and would only be doable if one assumes some growth in the future. Despite the first quarter's rate I don't see 2010 being a very good year considering what has happened in the last month.

This does not even take into account the fact that there may be no reason to limit greenhouse gases beyond what we are already doing.
Posted by Dagpotter at 5:44 AM No comments:

Language As Only The Communists Of The Thirties Could Say

I have written in the past about the "Annals of Communism Series" at Yale University. They just released a new batch of documents related to the Comintern and the fight for global Communism in the Thirties.

One of the documents about "the work of exposing “the wreckers in the ECCI.” included the phrase "The proof of this are the recent [and] blatant facts regarding Fritz David, the miscreant agent of the counterrevolutionaries Trotsky-Zinoviev-Kamenev, who stretched their bloody hands towards the heart and brain of the working class party, towards the VKP(b)’s Central Committee, and towards [its] leader com. Stalin."

This must have been written to the foreign Communist parties in an attempt to explain the purges by Stalin in the late Thirties. The ECCI was the Comintern's Executive Committee which was made up of international representatives.

You just don't see the phrase "the miscreant agent of the counterrevolutionaries Trotsky-Zinoviev-Kamenev," anymore.
Posted by Dagpotter at 10:51 PM No comments:

Raiders Shift Plans And Do A Proper Draft

At the end of the 3 day circus that is now the NFL Draft the Raiders ended up on paper with a very decent one. Either through their picks or trades they got a QB, two immediate starters on defense and two offensive linemen who are projects but great athletes. They rounded out the draft yet again with the fastest man available but took him at the end of the draft. It also indicates that the JaMarcus experiment is over at great cost.

The professionals were actually impressed. Who could have predicted this?
Posted by Dagpotter at 8:37 AM No comments:

Some of my favorite sites